After months of months of no running and feeling like my injury woes were never ending, I seem to have had a rather lovely surprise for Christmas. Over the last two weeks my Achilles on one side and my calf on the other seem to be very gradually settling and allowing me to get out on some tentative runs. I think I refused to believe it the first few times. Up until maybe two or three weeks ago I was still ready to concede defeat and forget about running. But after the last couple of runs I am really starting to believe I might be winning this battle against my own body.

After the London Marathon there was very little I could do without my Achilles flaring up and being really painful. And then when I would think that I could manage a small ten minute run my other calf would tighten up and cause me to limp. At one point even getting on the turbo trainer was enough to flare both sides up. When things were like that I was almost distraught. I know distraught is a total hyperbole to describe it but for someone who has been battling anxiety for the past year that is how I was when I felt like running was done for good.

Somewhere along the line I made a decision to stop running and rest. Somehow I developed the patience to not force myself out running and make myself worse. And back in September I made myself set two key goals and somehow I decided to stick with them:

No running until after Christmas or even into the New Year.

Get rehabilitating properly (I’d fart arsed around it but I hadn’t rehabbed properly and given it a chance to work).

I spoke to Physiotherapy colleagues and did my own research via journal articles and books. And then I embarked on the strictest regime of rehabilitation that I could handle.

It hasn’t been easy. There were more flare ups. There were days I didn’t believe anything was going to work and feeling like it was all futile. There were times I wondered if running was even worth all this effort. And then I would remember that I love running and that I have been a runner since I was 11 years old and 34 is far to young to throw in the towel. I took inspiration from all sorts of places: Jo Pavey, the Twitter running community, my Physiotherapy colleagues and patients who I had successfully helped in returning them to their hobbies. And I don’t know when the transition from feeling too injured to run to feeling able to have a little jog occurred but I’m now on my fourth or fifth run of thirty minutes. This would have been inconceivable back in September but looking back at my goals my timing has almost been spot on.

I’m still hedging my bets about things. I am leaving a day between runs and I continue to cross train to enable me to get in some strength work and some longer cardio sessions. I am incredibly fearful that I will relapse and won’t be able to run again. The fear of failure is still rather strong. I won’t book in any races or join a club yet because I want to be running consistently and they might be long term goals for 2015. But with some hope, and a little bit of light beckoning me towards the end of the tunnel, I feel like I could be getting somewhere. And hopefully in the New Year I’ll be able to do more of this: 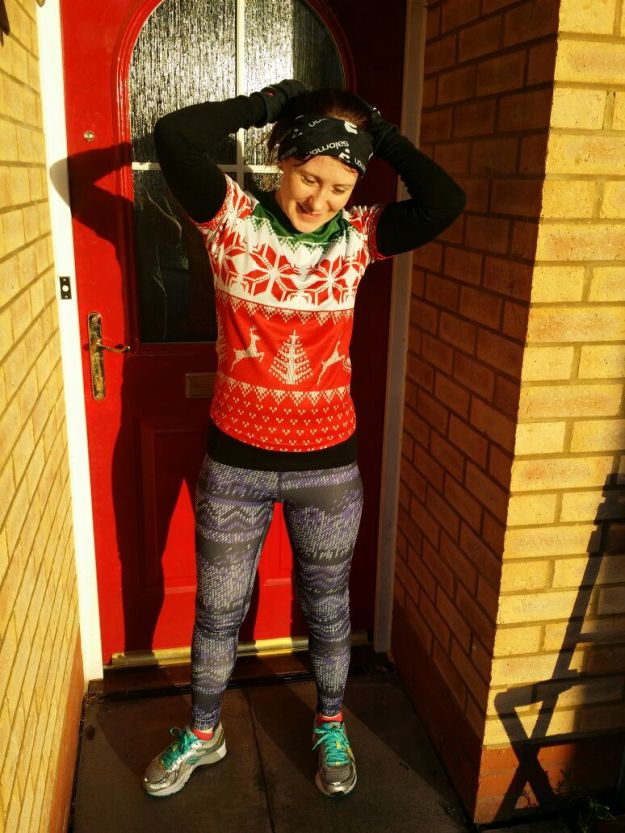 In the past year I have not run very much at all. I ran the London Marathon and then that was it. My Achilles tendon continued to be a nightmare and I decided to knock regular running on the head until I got on top of my injury. In terms of running this year has not gone the way I had hoped but other things have happened to help me fill the void slightly.

I discovered that I quite liked cycling and bought myself a road bike.

I started a new course which I love and have already gained so much from. It has also helped me re-ignite the passion for my profession which I really thought had waned.

I have come to terms with my lack of running and embraced other means of getting my running buzz.

I have become much more versatile in training at home when time is short and the kids are around.

I have gone back to circuit training and remembered how much I love that anaerobic burn from intense exercise.

I made a decision not to enter any races at all and that helped me take back some control over my injuries and niggles.

I attended a Mindfulness course and seem to have got over my insomnia *touches all the wooden objects*.

This year has been uneventful in terms of running and races but there has been plenty happening in other areas of my life. Hopefully as I continue to quietly work on my rehab I will be back to running and racing but I’m not going to force it. I’ve filled my life with lots of other fulfilling things so I’ve become less dependent of running for making me feel good.

I still miss being able to run daily in the way I did but I’m less panicked about it and I really hope that this will happen in 2015 but I’m in no hurry. I’ve got plenty to keep me engaged and excited about 2015. Including the small issue of a Velothon. Probably should book some training time in somewhere……

I haven’t been near this blog lately (again). I hate saying the phrase ‘I’m too busy’ but I am. And instead of humphing and moaning about how busy I am, I actually feel quite the opposite. In October I started my post graduate studies (again) which means intermittent trips to campus for long days of lectures. Work was fairly hectic (no bad thing) and then there has been the intensive run up to Christmas, fueled mainly by my sons’ school activities. It has been full on but at no point have I resented it. In fact I would rather not describe myself as busy. I would rather call myself otherwise occupied with life.

Amazingly I have managed to fit in some exercise and training. With a diary which has been shifting week to week I have developed a keen urge to fit running and exercise around kids, work and assignments. I wouldn’t say I have a training schedule just yet, I still feel I am rehabilitating from injury, but I have been far more organised about where I’m fitting in the active components of life. So much so that last week I attempted my first run-commute.

Once I convinced myself that I could in fact do it I set about making sure I had the right kit. For a start my old Mulberry bag (a reminder of how I used to spend my money pre kids)  was never going to cut the mustard for a 2.8 mile run. So when my husband asked me what I fancied for Christmas I tested the waters for an early present in the form of a rucksack. After a little bit of research I opted for the North Face Pinyon Backpack. I had tried a few backpacks and found that this was the best for me in terms of my height, size and my requirements for travelling to and from campus. I wasn’t intending to buy something pink but as pink goes it’s not too bad.

Once it arrived I made a decision on which would be the best day to use my new bag. With the weather the way it is I confess that on the day I did over fill my bag. I was worried I would be too cold travelling in. I was worried I would get soaked. I was concerned I wouldn’t fit everything in. Turns out that these days all your learning materials and power point presentations are easily accessible online so there’s no need for me to carry excessive amounts of paper and note pads. Which all meant I could fit way more running kit into the bag. Kit crisis averted. I duly stuffed extra t-shirts, vests and various hats and buffs into my bag along side my trainers and leggings. In hind sight, I way over stuffed.

During that day I was buzzing from a day of lectures from a fantastic guest lecturer called Phil Glasgow, who is a Physiotherapist and Head of Sports Medicine at Sports Institute Northern Ireland. However every now and again I would look towards the window and think to myself ‘Please don’t rain’. Other times I would think, ‘I’m too tired from today, I’ll get the train back to Central’. But by the end of the day I decided I was going to do it. My first run commute would be from the University Hospital and back to the Central Station in town.

At 3.40pm I headed off, all kitted out, into the afternoon winter sun. It was chilly but there was no need for gloves. They got stuffed back into my pocket. A few bag adjustments were made so that my Chelsea boots didn’t gouge me in the back and I was good to go. I walked out of the hospital campus as I didn’t want to run over any sick people milling around the concourse. Once clear I was up and running and on my way.

The first thing I noticed was how carrying a ruck sack changed my running gait. I had to shorten my stride but at the same time try not to let myself be pulled backwards by the weight in my bag. I was definitely over stuffed.

I hadn’t decided on an exact route so that meant a few twists and turns until I decided which way to go. In fact I think I went back on myself for half a mile before running back towards the station. And then because I was so keen to run into beautiful  Bute Park I nearly missed the sign which said that the park gates would be locked at 3.45pm. I swiftly ran back out again. I wanted running adventures but I didn’t want to get stuck in a park over night!

A stop at the traffic lights by Cardiff Castle allowed me to take in the Christmas tree and the lights. The light from the sky was gently dimming as I ran along the pedestrianised St Mary’s Street, bustling quietly with Christmas shoppers.

A quick look at my phone revealed that I had only a few minutes to spare before my train left and so I made it to the station with a sprint finish. A 30 minute winter’s plod to the station and I was on my final train journey home.

I can’t lie. I felt rather smug about my run-commute. A combination of a day of sports physiotherapy lectures and a 5km run to the station left me with a warm fuzzy glow of achievement. The bag did a great job for me although I’m slightly regretting not getting one with a clip round the waist too. I feel that there is a definite art to the run-commute and it is one that I am still to perfect. I’m also wondering if I need to be brave enough to wear my running kit to lectures so that I can cut down on the bulk. Or it’s likely that I’m over thinking this too much and I just need to go with the flow of the commute. But for a first time run commute experience it really wasn’t bad at all. Here’s to many more run commutes in the New Year.