I have watched with glee over the last year as campaigns for women’s sport and equality in sport have taken off. I have never been prouder of women I know who have recently taken on a new sport or a challenge having previously been put off. The fight against sexism in sport and exercise is wonderful and I will always teach my two boys that women are as able as men in sport. Yes there are undeniable biological differences which mean in some sports that men and women can’t always compete with or against each other but I hop for a day when ‘that’s a boy’s sport’ becomes a thing of the past.

However recently my eldest son has encountered another sort of attitude. He is 7 and has just gone into year 3. He is sport and activity mad and now that he’s a junior there are a whole host of after school activities and sports that are available for him to try. If he could he would do all of them. It’s not at all possible, we do need some time at time too, but the one sport he really wanted to try was netball. Absolutely I said. Netball is a great sport and with its skill set of passing, spatial awareness, fast pace and intercepting to name but a few it was only going to be of benefit to him and his physical literacy. It was also a mixed session which from a social point of view was also going to be of benefit.

But in the week leading up to the session he got a bit down about it.

My blood pressure rose a fair bit and I became incensed for my boy on his behalf.

Firstly I had a chat with my son about why ‘you’re a girl’ is not and should not be used as an insult. I explained that women do a great many things that men do and sometimes do it even better. I reminded him that his mum had run marathons, competed triathlons and occasionally lifted weights. I told him that as a ‘girl’ I played hockey and won medals in athletics. Our conclusion was that girls and woman are awesome and telling someone that they’re ‘like a girl’ is not an insult in the slightest.

He seemed happier as I also explained the benefits netball would have for his rugby. He did go to netball last week but I checked on him as I picked up his little brother to make sure he was going. He went along and the teacher told me he loved it. And what’s not to love, there’s a ball, there’s running and there’s shooting at a goal. He was buzzing with excitement and with all he had learnt.

This week he came out of netball and two of his school mates, both boys from his rugby team, had joined him. But on the way home he told me that some more boys had been teasing him again and that one had told a girl who goes to rugby that rugby is for boys, not girls.

The blood pressure rose again and I seethed as I tried to make sense of my thoughts. The first thing, which I didn’t say to my son, is that these attitudes are not coming from the children. These ideas are coming from adults within the home who tell their children that this activity is for boys and this activity is for girls. I remember a dad at a toddler group chastising his son for playing with a toy pram but the poor wee boy would only have been copying what his dad did to get them both there. there are obviously still these entrenched views about playing and sport that are being spouted at home and are then taken into school. It’s sad and ridiculously out dated.

Instead what I said to my son is that these boys might be a bit afraid. He looked a bit perplexed so I explained that sometimes people are too afraid about what other people think of them and that this stops them doing the things that they really want to do. I said maybe deep down these boys want to play netball too but are too afraid of what a person, like them, might say and isn’t that really, really sad.

I think a penny might have dropped with my son as he realised that he had carried on with netball despite the teasing and the name calling. I told him I was proud of him for going to netball no matter what the other kids said. I also said that him going had maybe made the other boys brave enough to go. He grinned and then the conversation was over. I don’t know if any of it sank in but I really hope so.

It makes me sad as a parent that girls and boys are still fighting against ingrained attitudes forced upon them by the adults in their lives. I’m sure parents of girls have a tough job making sure their daughters have the confidence to fight against these attitudes. As the mum of two boys I feel it is my job to develop within my sons a good attitude towards women and girls. They are reminded that we are equal, they should know that girls and boys should have the same opportunities, that there is no such thing as boys’ stuff and girls’ stuff and importantly that they should never utter ‘like a girl’ as a derogatory term.

It seems that my eldest son and I have been learning a valuable lesson alongside each other over the past few months.

I faced my fear of swimming in open water.

And then eleven days ago I completed my first Olympic distance triathlon which included my first open water 1500m swim in the Royal Victoria Docks.

A few months ago my 7 year old auditoned to be a mascot in the Rugby World Cup. 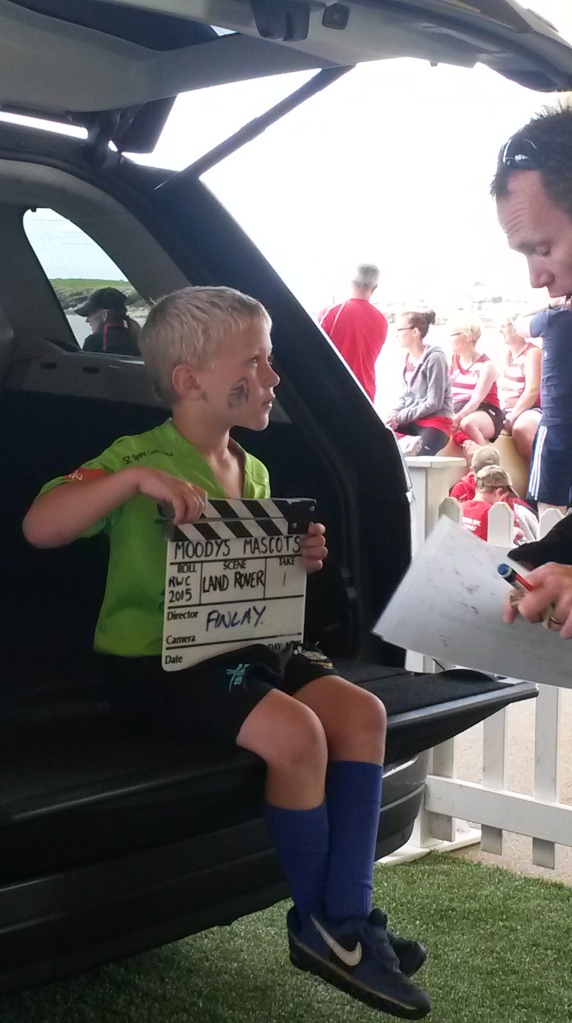 This weekend we were able to surprise him with some awesome news from his rugby idol Leigh Halfpenny. Finlay is to be mascot for Wales at Wales’ first game against Uruguay.

I am so unbelievably thrilled for him. I’m still thrilled for myself that I completed my first standard distance triathlon at the biggest triathlon event in the UK.

Finlay and I both nearly walked away from these opportunities. Both of us turned back round and faced our fears and we’ve both discovered that sometimes you have to do that to make the good stuff happen. Go and do something that scares you. You never know what might happen.